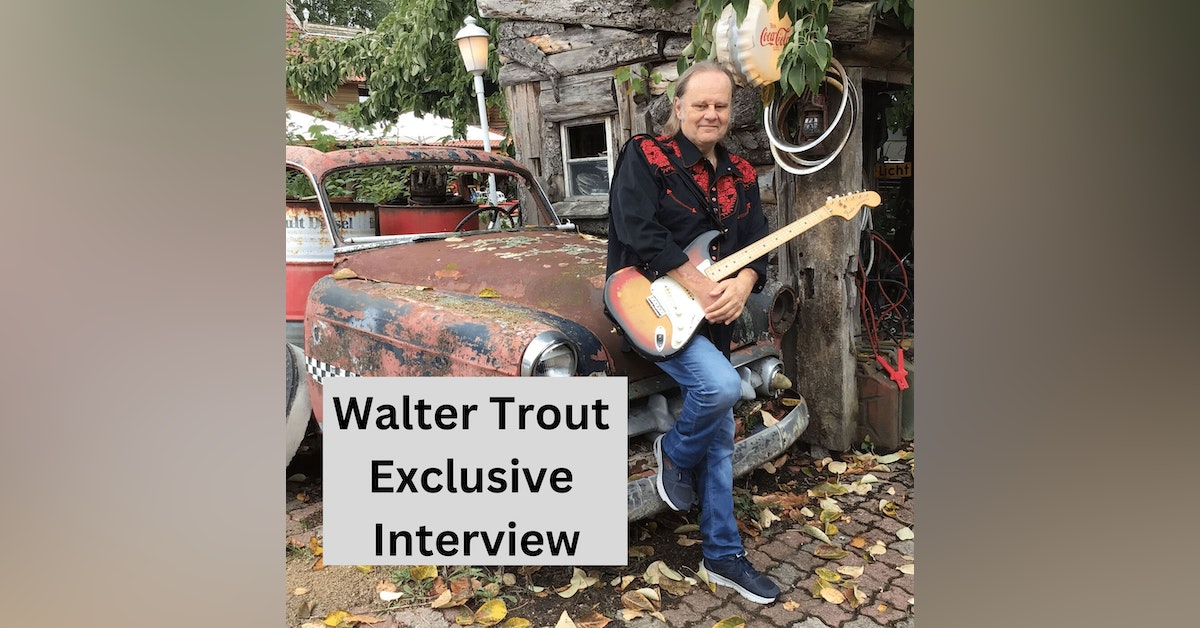 What can you say about a guy that's been laying down some sweet Blues licks for over 50 years that hasn't been said before? Walter Trout one of the preeminent Blues Guitarists of this decade and the last visited with The Trout about his career, his family, his guitars, his songwriting and much more during this exclusive interview. Trout's career began on the Jersey coast scene of the late 1960s and early 1970s. He then decided to relocate to Los Angeles where he became a sideman for John Lee Hooker, Percy Mayfield, Big Mama Thornton, Joe Tex, and many others. Now with decades of performing in multiple venues in many international cities behind his belt, Trout continues his journey of providing his tunes and especially his guitar playing for fans across the world. Learn more about Walter's musical life during this exclusive interview with The Trout.

Thanks for listening for more information or to listen to other podcasts or watch YouTube videos click on this link >
https://thetroutshow.com/

Today's podcast is supported by David Smith of Edward Jones. Are you happy with your financial strategy or maybe like to see what other opportunities are out there? Or gave David a call at 46937 215 87. That's 46937 215 87. David is only concerned about one person that's you and your financial health. So check him out. David Smith, Edward Jones, 46937 215 87. Everybody. It's the trout. Hope you're having a great day. We have a great episode on The Trout Show. This time we have one of the most preeminent famous blues guitar players in the world international star Walter Trout. Walter sat down and talked to me about his career, his life story, the ups and downs, the equipment he plays, just about everything. What makes this guy a phenomenal blues player. I love talking to him because I'm a blues guy too. And if you want to know about the blues artistry of Walter Trout and his history and where he's going from this point on, he just keeps making records all the time and touring all the time. Stay tuned for this episode of The Trout Show. So up next, the guy that makes the blues sing mr. Walter Drought on The Trout Show. That's next. here's my first question for you. First off, I think you are the most tenacious human being on the planet as far as a musician because I look at your schedule. When I talked to John months ago, I looked at your schedule. Anytime I reach out to somebody of your caliber, I always look and see where they're turing. Dude, you never stop. But that's not my real question. I just look at it and go, he just keeps going. He's like the energizer bounty. But let's go back to the beginning because I can tell you what happened to me. But tell me when you first realized the blues was something that really what age were you when you went, oh, man, I think I'm into this. Or Where did you see, I noticed you played with some very major, well known players when you first started out. When did that hit you and go, this is something I want to do. I play the blues. You know, my guitar odyssey has sort of three phases. I was a kid, I took trumpet lessons. I was going to be a jazz trumpet player. I was a very good trumpet player. I played it actually all through high school in the band and the marching band, right. But when I was ten years old, my brother, I got to go back and say, I really love big band jazz and Mingus when I was ten years old, I even got to spend the day with Duke Ellington, hang out. Wow, that's cool. So that was my focus. But then I was ten years old and my older brother, who's five years older, came home and he said, he goes, there's something about this guy. I need you to hear this. This is very different than what you're into, but I want you to check this guy out. And it was the first album by Bob Dylan and something about it grabbed me in a way that nothing else really had up to that point. And I realized listening to it, because I'd been listening to very complex big band music and John Coltrane and Eric Dolphie and stuff, right? And here was these very simple three chord songs. But with all this feeling and messaging, all these things that needed to be said over just these simple musical progressions, but with these beautiful melodies, I was just taken by it. And it wasn't long after that, once again, my brother comes home and says, hey, this guy just gave me this guitar. I think you probably want it, don't you? And I said, sure. And I just got a chord book and started learning chords, the Mel Bay chord. I was going to say Mel Bay. Had to be Mel Bay because that's where we yeah, Mel Bay. I sat with Mel Bay and I started figuring out these Bob Dylan songs. And that was cool. That was like 1961 or 60 219 64.